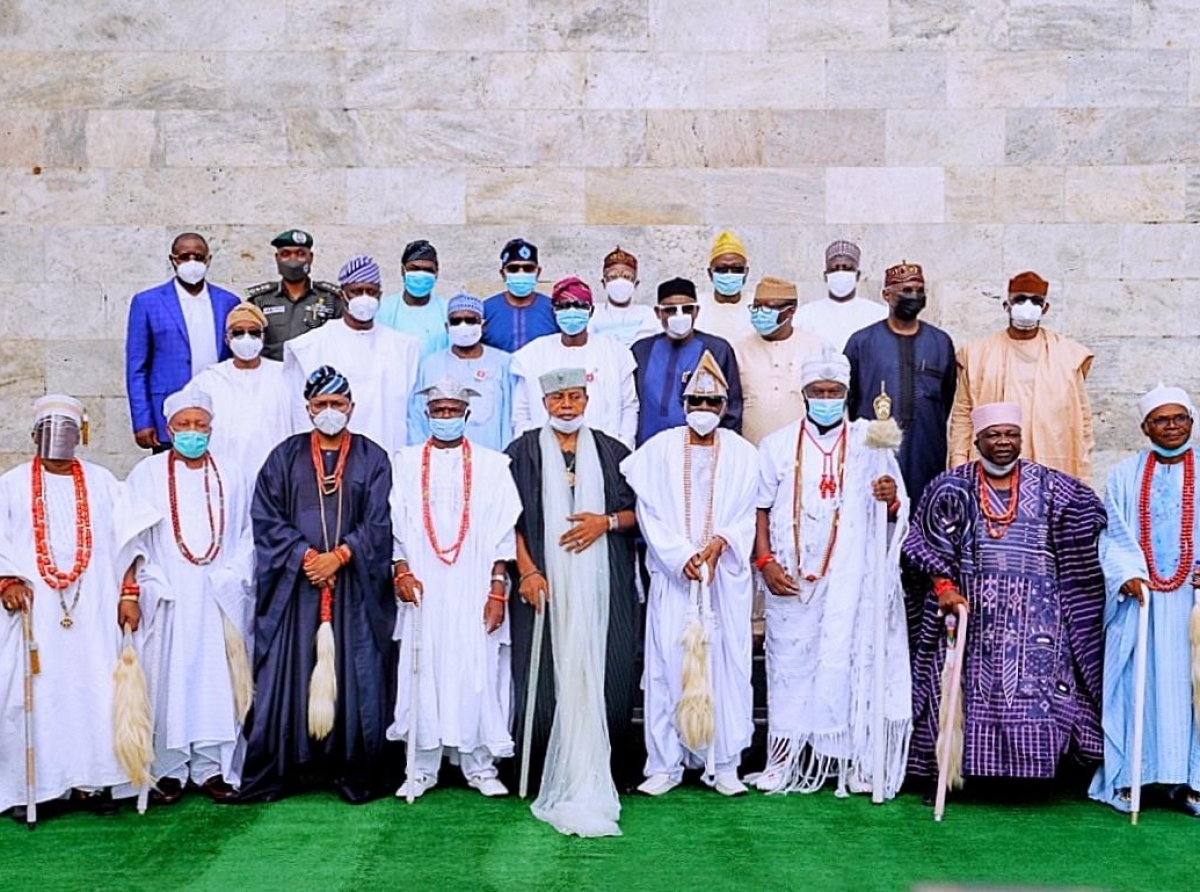 The threat posed by the recent destruction of key public assets to the economy of the Southwest has brought up a Peace Dialogue in which political leaders, traditional rulers and leaders of thought across the region came together to discuss the way forward.

Lagos State Government hosted the dialogue, which was at the instance of all the six Governors of the Southwest states, to forge a common front with traditional institutions in addressing the issues that led to the recent nationwide youth demonstration, which ended in violence that shook the region to its foundation.

President Muhammadu Buhari was represented at the event by his Chief of Staff, Prof. Ibrahim Gambari. Also, all serving members of the Federal Executive Council (FEC) from the region and Inspector General of Police (IGP), Muhammed Adamu, attended the event held at the Banquet Hall in the State House, Alausa.

The session offered traditional rulers a no-holds-barred opportunity to bare their minds on the marginalisation of traditional institutions in the process of governance.

Chairman of the region’s Governors’ Forum and Ondo State Governor, Arakunrin Rotimi Akeredolu, said the coordinated violence sparked by the EndSARS protest shook the Southwest to its foundation, given the unrestrained manner with which public assets and infrastructure that had sustained the region’s economy were destroyed by hoodlums.

He said the style of the attacks, especially in Lagos, was worrisome, stressing that the peace in the region remained fragile in the aftermath of the violence.

Akeredolu said the need to fully restore peace in the Southwest and address the issues that made youths to be used by those who orchestrated the destruction.

He said: “Before our very eyes, what started as a peaceful demonstration turned to different thing that became a threat to all of us, who are regarded as elite. What we witnessed in the violence showed that something needs to be done to address the underlying issues and come out with solutions. We must be able to sustain the peace in our region at all cost.”

President Buhari, who spoke through Prof. Gambari, said the vigorous manner of the EndSARS protest indicated the frustration of the youth, who he said had been ignored for a long time in governance. He said the political class must go beyond the lip service and equip the young people with skills that would make them competitive in market.

The President reiterated his commitment to addressing the root causes of the protest, pointing out the reforms which the youths clamoured for would be done and cases of abuses would be pursued to logical conclusion.

Gambari said: “Our Government’s effort are emerging from multiple level. The Vice President and Governors are designing an engagement framework through the National Economic Council that will be rolled out across States of the Federation. Chief among them is police reform across all its dimensions. Community policing as an additional layer that can resolve some of our security issues.”

Governor Babajide Sanwo-Olu said the engagement could not have come at a better than the present period when the region had just come out from disturbing events.

He believed the dialogue would open a new chapter of peace and prosperity in the Southwest.

The discussion went into an executive session in which all the Southwest Governors, traditional rulers and head of security agencies deliberated on the way forward.

Ooni of Ife, Oba Adeyeye Ogunwusi, applauded the initiative, which he described as “right step” but upbraided the political class for lack of consultation with traditional institutions in decision making.

He said the dialogue would bridge the gap of communication between political leaders and traditional rulers.

Alaafin of Oyo, Oba Lamidi Adeyemi, attacked the unitary system being practised, saying the arrangement had led to insecurity and restiveness.

Alawe of Ilawe Ekiti, Oba Adebanji Alabi, said security must be fortified in the region to protect the economy of the Southwest. He also called for the creation of Southwest Development Agenda to revamp and rebuild the destroyed assets.

Oba of Lagos fingered politicians as the cause of issues that led to the EndSARS protest, saying unemployment contributed to the problem.

At the end of the meeting, the participants issued a 13-point communique in which the Southwest Governors and traditional rulers demanded for the repair of destroyed economic assets of the region.

The communique, signed on behalf of the participants by Gov. Akeredolu and Ooni of Ife, reads: “The security architecture of the country requires adjustment to adequately address the threats and realities of insecurity in the country. There should be more police presence in communities in the Southwest states.

“A comprehensive programme that addresses youth employment and empowerment should be prioritised. Closer coordination and complementarity between the States and the Federal Government. Curricular of tertiary institutions should be reviewed, with emphasis placed on skills acquisition and entrepreneurship.

“We recognise the damaging and negative impact of fake and false news, and we worry about its destructive and dangerous potency. We call on Federal Government to use the instrumentality of existing laws and regulations bench-marked from other countries to provide safeguards against the spread of fake news. The 2015 Cyber Act must also be fully used.”

Leaders of Southwest demanded a review of reports of past constitutional conferences, including the 2014 National Conference and implement some of the recommendations, especially with reference to security, economy, equal treatment for citizens all over the country.