Ronaldo was thrust straight into the United XI at Old Trafford after sealing his move from Juventus shortly before the international break.Twelve years and 118 days on from his previous Premier League appearance, it marked the longest gap between outings in the competition’s history.

And Ronaldo was immediately involved in the final third, attempting a game-high five shots in the first half.

The fifth of those found the net to put United 1-0 up, profiting on Freddie Woodman’s fumble from a deflected Mason Greenwood strike.

Only Matt Jackson (13 years and 187 days between May 1993 and November 2006) has gone longer between Premier League goals, with Ronaldo’s previous effort coming 12 years and 124 days earlier against Manchester City in May 2009.

At 36, Ronaldo became United’s oldest Premier League goalscorer since a 39-year-old Ryan Giggs’ final goal in the competition in February 2013. Only Giggs and Paul Scholes have netted for United in the competition at an older age than Ronaldo. First Bank of Nigeria Limited has announced its sponsorship of the 5th edition of the Chief Olusegun Obasanjo golf tournament, organized by the Abeokuta golf club. The competition, which is scheduled to hold on Saturday, 14th August 2021 will have Chief Obasanjo perform the ceremonial Tee-off to the glamour of the 150 golfers participating from across Nigeria.

Speaking on the competition, Kola Adeneye, the Captain of the Abeokuta golf club, said; “Abeokuta golf club is putting up this tournament, fully sponsored by First Bank of Nigeria Limited to celebrate Chief Olusegun Obasanjo, whom we all know to be an icon, a patriotic Nigerian and an entrepreneur. He is worthy to be celebrated and it’s not only when somebody dies that you celebrate him.

“So, Abeokuta golf club has put this tournament together to celebrate him and this is the fifth edition and we want to sincerely thank FirstBank for the support… It’s going to be a wonderful experience, a nice outing for golfers all over Nigeria to come and celebrate Baba Olusegun Obasanjo”, the captain emphasised.

Highlighting the Bank’s contribution to sports development in Nigeria, Mr. Tunde Owolabi, FirstBank’s Group Executive, Retail Banking (Lagos & West) said “we are delighted to join The Abeokuta Golf Club to honour Chief Olusegun Obasanjo for the indelible roles he has played to the socio-economic and political development of the country. The Bank’s influence in the development of sports in Nigeria is under its First@Sport initiative.

“In over a century, FirstBank has sponsored various sporting events known as its legacy sport. These events include the Georgian Cup of Kaduna Polo Club, for over 100 years; the Dala Tennis Hard Court in Kano Club for over 30 years; the FirstBank Lagos Amateur Open Golf Championship in Ikoyi Club which will be in its 60th year this November and the Obasanjo Pro-Amateur tournament of Abeokuta Club now in its 5th year”, he concluded. 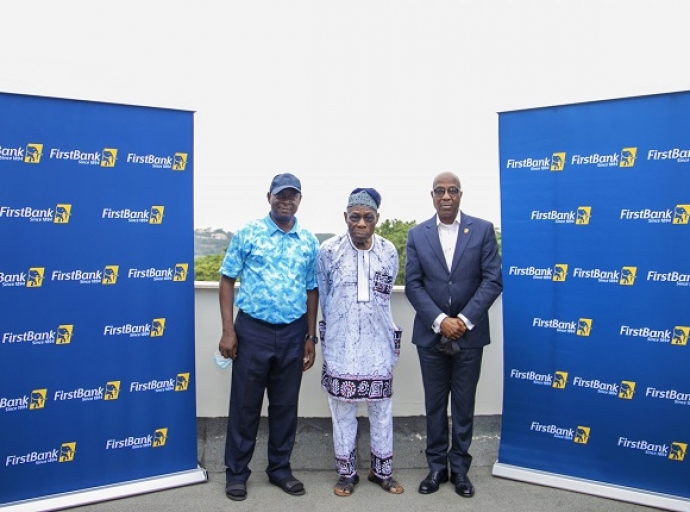 All is set for the biggest boxing show in the World’s sporting history. The much awaited bout between Nigerian British boxer Anthony Oluwafemi Joshua and Tyson Fury will take place in Saudi Arabia on August 14. The boxing champions will contest all four world heavyweight titles for the first time in the sport's history.

In a video on Twitter,Fury,known as the 'Gypsy King', said: "I have got some massive news. I have just got off the phone with Prince Khalid of Saudi Arabia and he told me this fight is 100% on, August 14th, 2021."

The WBC champion, 32, added: "All eyes of the world will be on the Kingdom of Saudi Arabia.

"I cannot wait, repeat, cannot wait to smash Anthony Joshua on the biggest stage of all time. This is going to be the biggest sporting event ever to grace the planet Earth. Do not miss it. All eyes on us. See you all in Saudi."

Joshua, from Watford, last week called on the highly-anticipated fight to be finalised as he aimed a pointed remark towards Fury on social media.

Fury, who was born in Manchester, replied: "Are you ready for a war? Working hard to give the fans a big KO!"

Plans for a fight between the pair were set in motion when Fury beat Deontay Wilder to capture the WBC title in February 2020.

That was a couple of months after Joshua avenged his only career loss to Andy Ruiz Jr, a fight which also took place in Saudi Arabia, at the Diriyah Arena. 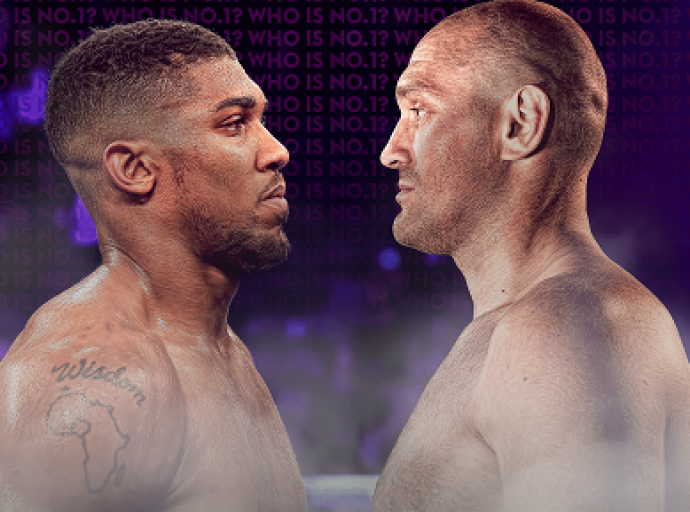 Anthony Joshua knocked out Kubrat Pulev in the ninth round at London’s Wembley Arena on Saturday to retain his IBF, WBA and WBO world heavyweight titles. Joshua’s victory sets up a potential all-British heavyweight unification bout against Tyson Fury in 2021.


Joshua regained the WBA,WBO,IBF titles, in a rematch against Andy Ruiz Jr. last December in Saudi Arabia, after being stopped by the Mexican-American in an upset at Madison Square Garden that summer.

Joshua, born to Nigerian parents from Sagamu,Ogun state, beat the Bulgarian at the Wembley stadium on Sunday morning, to hand Pulev his second defeat in his professional boxing career.

The first round saw both pugilists with lots of single punches, while none of them really managed to get anything special in, but Joshua had the snappier jab.

Although the Bulgarian came out for the third round more active than he was in the first two rounds, Joshua landed a one-two for the first meaningful shot of the round.

Then Joshua landed uppercut after uppercut to complement his overhand rights, and Pulev was left barely able to survive.

Joshua secured his 22nd knock-out against Pulev, bringing his bout records to 24-1, 22 KOs.

The 31-year-old uppercut was the story of this bout, because he worked the body and the head with jabs, but when the opportunity presented itself, Joshua destroyed Pulev — an amazingly tough man — with an uppercut to floor the Bulgarian in the ninth round.

Joshua landed a right hand flush on Pulev’s chin to win it, but the Bulgarian was barely in the room, having just got up from the first knockdown in the ninth round.

“I hope everyone was satisfied tonight. For me, I stuck to what I know best, boxing. You ask the crowd what they want to see!”

“I’ve been chasing the belts since I started this. It’s not about the man; it’s about the belt and the legacy. If it’s Tyson Fury with the WBC belt, then let it be Tyson Fury!” he added. 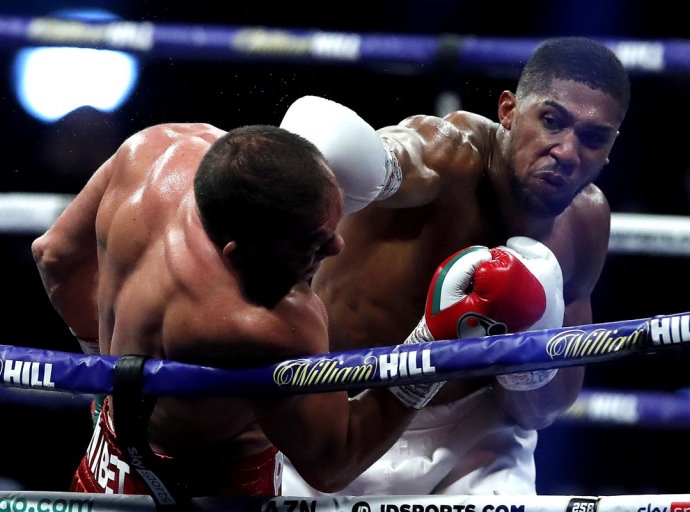 Italy beat England in a penalty shootout to win the European soccer championship on Sunday, dashing England’s hopes of winning its first major title since the 1966 World Cup and restoring the reputation of an Italian squad that had been humiliated five years ago when it failed to qualify for the World Cup.

The shootout was a dramatic conclusion to a gripping day at London’s Wembley Stadium, and to a monthlong tournament that overcame a one-year pandemic delay and innumerable public health concerns on its way to a final, scintillating day in London.

The final was worth the wait: It saw England take the lead on a goal by defender Luke Shaw after only two minutes, and then a second-half response from Leonardo Bonucci. Before and after was a whirlwind of highs and lows, hard fouls and close calls, misses and makes, before Italy prevailed in the shootout, 3-2.

Even the shootout had full chapters of drama: Players brought on just so they could take part missed their shots, and Italy’s surest penalty taker failed to convert an attempt that would have won it for his country.

Only when Gianluigi Donnarumma, Italy’s hulking goalkeeper, had pushed aside the final attempt, by the England teenager Bukayo Saka, was it over, his save setting off a wild celebration that saw players from each team dissolve into tears.

For English fans, the ending — the entire day, really — was an emotional was hope and optimism to surprise to disbelief as they stumbled out of Wembley into the night, into a steady London rain.

“I’m devastated,” said Rosie Mayson, 25, as the shiny English flag she wore on her cheek faded with some tears. “That team embodied so many amazing values, but still, we didn’t bring it home.” 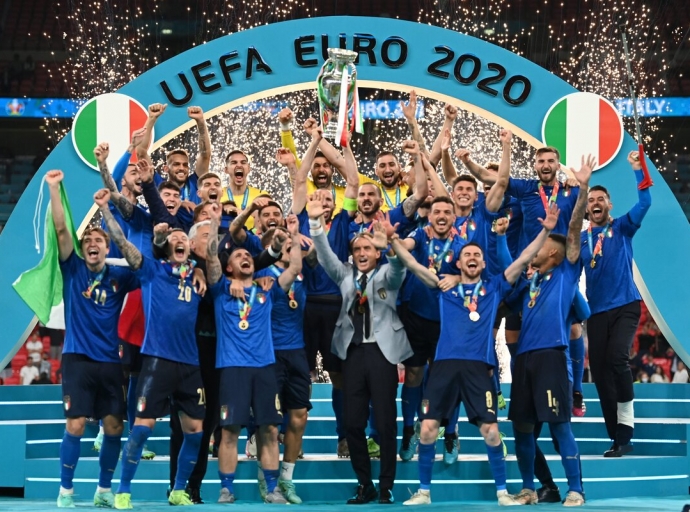 AS Roma have appointed former Tottenham Hotspur manager Jose Mourinho as their new head coach on a three-year contract starting 2021-22 season, the Italian Serie A club announced on Tuesday.

The decision comes after the club announced coach Paulo Fonseca will leave his role at the end of the current campaign.

"We are thrilled and delighted to welcome Jose Mourinho into the AS Roma family," club president Dan Friedkin and vice-president Ryan Friedkin said.

"A great champion who has won trophies at every level, Jose will provide tremendous leadership and experience to our ambitious project."

Mourinho, who has previously coached Porto, Chelsea, Inter Milan, Real Madrid and Manchester United, was sacked by Tottenham last month after 17 months in charge of the London club.

"After meetings with the ownership and Tiago Pinto, I immediately understood the full extent of their ambitions for AS Roma," Mourinho said.

"It is the same ambition and drive that has always motivated me and together we want to build a winning project over the upcoming years.

"The incredible passion of the Roma fans convinced me to accept the job and I cannot wait to start next season."... Reuters 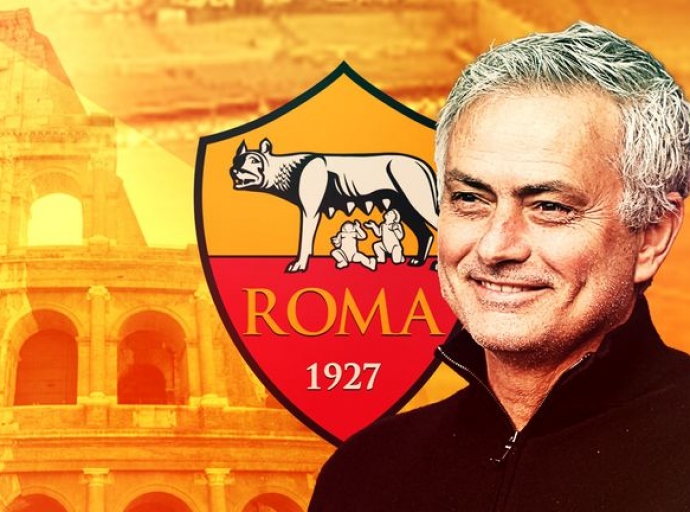 John Felagha, a former Flying Eagles goalkeeper, has passed on.

The Nigeria Football Federation (NFF) broke the sad news on its Twitter page on Monday.

The federation said the 26-year-old former Golden Eaglets shot stopper at the 2009 U17 FIFA World Cup died in Saly, Senegal on Sunday, while on holiday.

It also expressed condolences to the bereaved family of the late footballer.

“Former National U17 and U20 goal keeper John Felagha has died. Felagha died on Sunday in Senegal. He was aged 26. Our thoughts and prayers are with his family,” the NFF wrote. 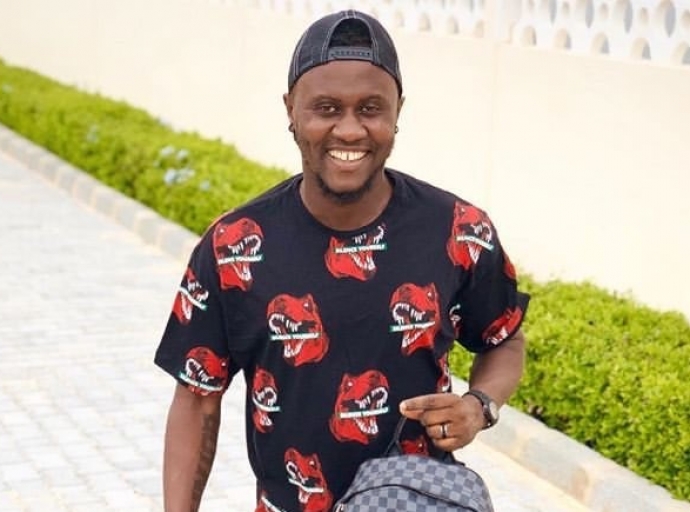 Chelsea’s Kai Havertz repaid some of his huge transfer fee as his first-half goal sealed a 1-0 win for his side over Manchester City in the Champions League final on Saturday.

The German youngster, Chelsea’s record signing, latched on to Mason Mount’s pass and evaded City keeper Ederson before rolling the ball into an empty net in the 42nd minute.

Premier League champions City were favourites ahead of the final but suffered a desperately disappointing night in Porto in what was their first Champions League final.

Pep Guardiola’s side were never allowed to play their normal fluent game and could not respond as a disciplined Chelsea sealed a second Champions League triumph.

Chelsea boss Thomas Tuchel won the tactical battle against his City counterpart Guardiola and his side could have won by more had Timo Werner converted two gilt-edged chances.

City laboured after the break searching for openings and their cause was not helped when playmaker Kevin de Bruyne went off injured after a clash of heads.

The London club may have finished fourth in the Premier League, a huge 19 points behind the champions City, but this, remarkably, was their third win over Guardiola’s side in six weeks.

They shattered City’s hopes of a domestic treble when they triumphed in the FA Cup semi-finals in April and then delayed their title celebrations with victory in Manchester.

Now, in a final watched by a limited crowd of just over 14,000 fans who created a raucous atmosphere, they have denied City the first Champions League crown they and Guardiola so crave.This is Chelsea's second champion league title. 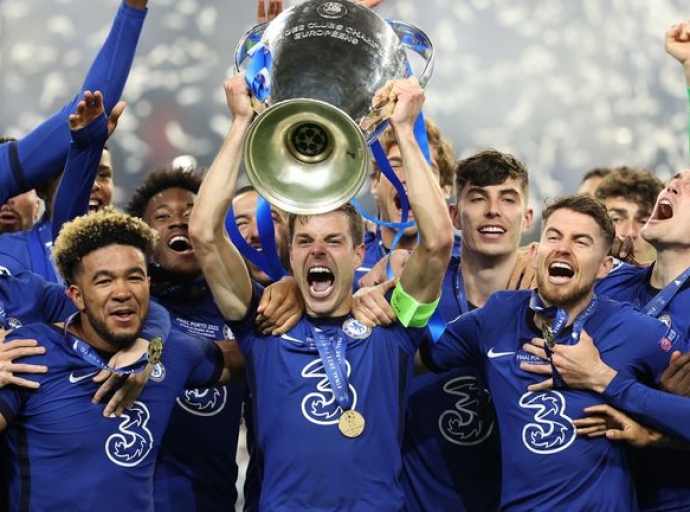